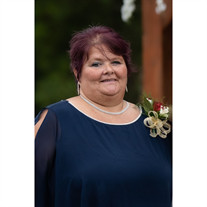 Penny L. "Updegraff" Geyer-Caufman 8/5/68-2/20/21 So we fix our eyes not on what is seen, but on what is unseen, since what is seen is temporary, but what is unseen is eternal. - 2 Corinthians 4:18 Penny L "Updegraff" Geyer - Caufman passed away February 20, 2021 at Holy Spirit Hospital from complications related to COVID-19. Penny was preceded in death by her father Norman L Updegraff Sr. & her infant son. Penny's love and legacy lives on in her surviving relatives, husband Teddy Caufman, grandmother Clara Crousore, mother and step father Sandra & Leslie Hardy, sister and brother in law Stacey and James Godbold, brother and sister in law Norman & Cathy Updegraff, the father of her children Douglas Geyer, her beloved children Todd & wife Liz Updegraff, Chris & wife Raquel Smith, Matt & wife Sierra Smith, Jennifer & husband Christopher Morrison & David Geyer. Her niece Samantha & husband Jarrett Lehman, nephew Nick & fiancé Ashley Updegraff, Ty Updegraff & niece Ceaira Stone. She was known as Mawl-Mawl to her grandchildren: Cheyenne Smith, Noah Smith, Mackenzie Smith, Landon Smith, Sarah Smith, Shelley Smith, Scarlett Smith, Evelyn Smith, Marty Morrison, Bowe Morrison, Brianna Geyer, Brendan Geyer, Sage Lehman, Maddox Lehman & Zander Lehman. She also leaves behind her fur babies Levi & Bella. She was an active member of the American Legion and V.F.W. Penny was a beautiful soul who impacted so many people in her community and was known to most as Momma P. She was very hardworking and worked numerous jobs throughout the years that allowed her to be available for her children. She drove school bus for many years and worked in the nursing industry and home health care. She enjoyed cooking, baking, crafting, photography, and any event that involved her children and grandchildren. SERVICE DETAILS A private service for family will be held on Friday February 26th at 11:00 am. The family invites any who wish to pay their respects to a walkthrough visitation that will be held Friday February 26 from 5:00-7:00 pm at Boyer Funeral Home 101 W. Main Street New Bloomfield, PA. In lieu of flowers, please consider donating to one of her supported charities, Samaritan's Purse. The Boyer Family is honored to handle the arrangements for the Caufman Family.

The family of Penny "Updegraff" Geyer-Caufman created this Life Tributes page to make it easy to share your memories.

Send flowers to the Geyer-Caufman family.