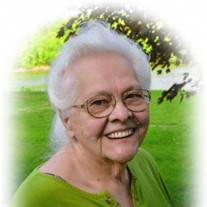 Shirley Clara Serucsak, of Halifax died on Friday, October 8, 2021 at the age of 89. Shirley was born February 10, 1932, on her grandfather’s farm in Halifax Township. Her family moved to Matamoras where she and her seven siblings were raised during the depression years. Shirley attended a one-room schoolhouse and graduated third in her class at Boyer Memorial High School. Shirley, a lefty with the most beautiful handwriting, aspired to be an artist (and did begin lessons), but soon met and married Marty Serucsak, and so began a whole different life. Shirley and Marty built a home from scratch where they raised their six kids.Life wasn’t always easy; Shirley worked hard and sacrificed her own ambitions for the needs of the family. Even in the roughest of times, she made sure that birthday cakes, Easter baskets, and Christmas presents always appeared.Growing up before television made playing cards a popular source of entertainment within the Sweigard household. By age 6, Shirley could play Hausey and Pinochle with the adults. Throughout her life, playing cards with her sisters was a favorite pastime. She often said if she wasn’t on Tull’s side she had to pay extra attention! During her long life, Shirley witnessed hundreds of historical events and new inventions, many of which are now obsolete. The one she highly favored was Atari’s 1982 Q-Bert, which she competed in playing against her grandkids. None have ever topped her scores. When Shirley was asked if she would change anything if she could do her life over again, she said she would do it all the same. There were a lot of good times that outweighed the bad, and she was happy to have all her grandkids. Shirley was preceded in death by her parents, James and Marie Sweigard and her sister, Rachel Rotharmel. She lost her youngest son Joseph in 1971, her husband Marty in 1982, her oldest son Marty (Sweet Pea) in 2015, and her granddaughter Teresa in 2017. Surviving are brothers, Dallas, Jamie, and Max; sisters, Betty, Alfretta and Corine; children, Roxanne, Patricia, Michael, and Anthony; 6 granddaughters, 12 great grandchildren, and 3 great-great grandchildren. Graveside services will be held at 11 AM in Thursday, October 14, 2021 in Long’s (St. Peters) Cemetery, Halifax. Rev. Michael Witmer will officiate. Boyer Family Funeral Home is honored to handle the arrangements for the Serucsak Family.

Shirley Clara Serucsak, of Halifax died on Friday, October 8, 2021 at the age of 89. Shirley was born February 10, 1932, on her grandfather&#8217;s farm in Halifax Township. Her family moved to Matamoras where she and her seven siblings were... View Obituary & Service Information

The family of Shirley Clara Serucsak created this Life Tributes page to make it easy to share your memories.

Send flowers to the Serucsak family.