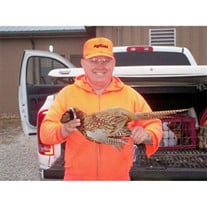 (Karl) Wayne Fry So we fix our eyes not on what is seen, but on what is unseen, since what is seen is temporary, but what is unseen is eternal. - 2 Corinthians 4:18(Karl) Wayne Fry, beloved husband of Patricia (Connelly) Fry passed away June 15, 2021, after a long and courageous battle with Alzheimer's Disease. He was proceeded in death by his parents, Karl and Olivia, his brother, Ralph, and sisters Fay and Beverly. Wayne is survived by his wife of 51 years, Pat, his children, Renee (Ryan Hawker), Julie, and Michael (Tammy) and grandson Liam, his twin sister, Jean (Don), Shirley, Don (Liz), brother Lynn (Mary Jane), sisters-in-laws, Mary Connelly and Jeanne (Ralph) Fry, and numerous nieces and nephews.  Wayne grew up on a dairy farm in New Bloomfield, PA. He played varsity sports for West Perry High School and was an outstanding athlete and a member of the band. He proudly served in the US Navy where he was in naval intelligence during such important events as the Bay of Pigs invasion and the Cuban Missile crisis. After serving, he attended Penn State Harrisburg, where he met fellow student, Patricia Connelly. After receiving his BA ('69) from Penn State, he married Patricia and received him MBA from PSU in '70. They then moved to Ohio where Renee and Julie were born. In 1974, he relocated to Streator, IL where Michael was born. He worked most of his life as a Farm Manager for Union Bank in Streator and then as owner of KF Agri-Management, a commodity business, and KF Awards.  Wayne was an avid hunter and was instrumental in establishing one of the best hunter education programs in the state of IL, a position he held for 25 years. He was dedicated to promoting wildlife and conservation. Through his membership in Pheasants Forever, he established many food plots throughout LaSalle County. He also worked closely with LaSalle County Soil and Water Conservation District to put many land-use projects on farms. He served for over 20 years as a board member for the Marshall County Sportsman's Club where he helped develop the fishing and camping grounds, managed the lake, and taught his children to fish. He was involved in the Streator community including the United Way and leading Streator's wildlife prairie projects. Wayne was a dedicated Penn Stater, as he, his wife and three children all graduated from there. From his lion pants to his PSU hats and ties, he enjoyed wearing his PSU attire to work during big football game weeks. He and Pat were able to take their children and friends to many football games and instilled a life-long love of Penn State in them. In tribute to their 50th wedding anniversary, he and Pat donated a bench by the lion shrine. From coaching softball to taking Mike hunting and fishing, he was dedicated to his wife and family. He was able to pass on many of his passions to his children, except gardening that is. He loved hunting, fishing, and his numerous Brittany Spaniel dogs. After retiring, he and Pat moved to Port Matilda, PA where they enjoyed PSU sports, and spending time with their grandson and children. He was blessed with many great friends throughout his life, and he will be greatly missed by all of them.SERVICE DETAILS A gathering will be held at 11 AM  on Monday, June 21, 2021 in the Boyer Family Funeral Home, New Bloomfield. Rev. Dr. Linda Shank will officiate.  Burial with full military honors will follow in Bloomfield Cemetery. The Boyer Family is honored to handle the arrangements for the Fry Family.

The family of (Karl) Wayne created this Life Tributes page to make it easy to share your memories.

Send flowers to the Wayne family.