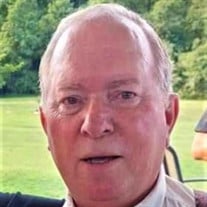 Jerry R. Woltz 71, of New Bloomfield, died December 18, 2021. He was born August 27, 1950 in Newville, Pa to the late Richard E. Woltz and Dorothy L. Woltz (Reep-Coldsmith). He was employed by AMP, Inc/Tyco for over 40 years. He was an avid hunter and fisherman, taking many trips with friends and family to Colorado, New York, Canada, and Maine where he hunted snowshoe hare, mule deer, elk, and caribou. He was also a long time member of the Carlisle Beagle Club. Jerry had a camper in Lock Haven where he spent many good times hunting and fishing with family and friends. Jerry’s loving wife and partner of over 20 years, Patricia A. Ray followed him in death in February of 2022. He is survived by his son, Wesley R. Woltz of Harrisburg and his daughter, Michelle R. Gallaway (Husband- Frank) of Boiling Springs, two step-children, Tracy Young of Miami, Fl, Nathan Young (Wife-Charlotte) of Los Angeles, CA; four brothers, Robert Coldsmith of Newville, Randy Coldsmith of Carlisle, Gregory Woltz of Shippensburg, and Brett Woltz of Carlisle; one grandchild Emma Gallaway and three step-grandchildren Sienna, Emma, and Charlie Young. Memorial services will be held Saturday April 2 at Newville Assembly of God, 403 Oak Flat Road, Newville, at 3:00 p.m., with the Rev. Jeffrey W. Kettering officiating. Arrangements are being handled by the Boyer Family Funeral Home of New Bloomfield.

The family of Jerry R. Woltz created this Life Tributes page to make it easy to share your memories.

Send flowers to the Woltz family.