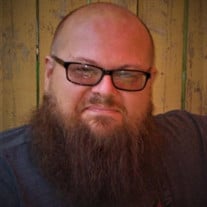 Obituary James L. Campbell III, 47, born October 30, 1973, stepped into the loving arms of his Savior on September 26, 2021, in his home in New Bloomfield. He was the son of James L. Campbell Jr and Rosie Campbell of New Bloomfield, both surviving. He is also survived by a brother Kevin Campbell and a neice Aleyna Campbell of New Bloomfield, two children Savannah Klunder (Jeffrey) of Shermansdale and Anthony Scola of Massachusettes, and two grandchildren Adalyn and Waylon Klunder. Also surviving are grandparents James L. Campbell Sr and Adrianna Campbell of Millerstown, and Helen Brown of Montana, as well as many aunts, uncles, and cousins. He was preceded in death by his loving wife Heather Campbell, and grandparents Kenneth and June Miller of Newport, and Jack Brown of Montana. Jim was an artistic soul at his core. Anyone who knew him would be confronted with some aspect of his artistic skill, be it his ability to very eloquently put his thoughts, feelings, and emotions onto paper or into words that would tug at the heart strings of all who received them, or his ability to realistically recreate the world around him in charcoal or pencil drawings, or possibly the most important to him personally...his ability to let his singing voice resonate in the hearts and minds of all those who had the pleasure of hearing him belt out a verse and chorus. Whether in church on a Sunday morning, sitting out back around a fall night bonfire, or on stage in a local pub, Jim was always ready to sing at a moment's notice. Music surrounded him at all times, and it was the driving pulse in his veins. The privilidge to lead worship in his local church was what he often said was his calling. While Jim will be dearly, grievously missed here on earth, there was nothing on his heart that was more prominent than being reunited with his "Bonny Lass" Heather, who went on before him only a little more than two years earlier. And so, we celebrate his reunion in Heaven...with her, his Jesus, and so many others who have gone before him. "Ne obliviscaris"

The family of James L. Campbell III created this Life Tributes page to make it easy to share your memories.

Send flowers to the Campbell family.