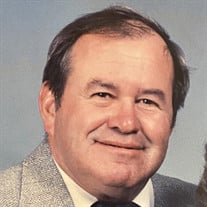 Jack H. Miller, 87, of Morris Road, Duncannon, went to be with the Lord on Tuesday, 14, 2021, at his Watts Township home. Born July 6, 1934, in Halifax, PA, Jack was the son of the late Charles E. and Verna M. (Kolva) Miller. He graduated from Halifax High School in 1952 and honorably served in the United States Marine Corps from 1953-1956. Following his service in the military, he attended Elizabethtown College where in 1960, he obtained a bachelor’s degree in business with an interest in history. After graduating from college, he worked in the insurance industry for approximately seven years prior to accepting a position in 1968 as a computer systems analyst for the Navy Ships Parts Control Center (now Navy Support Activity), Mechanicsburg, PA. He worked for the Navy until his retirement in 1988. After retirement, he worked for the Perry County Transportation Authority for sevenyears. Jack was a Christian, patriot and devoted husband, father, and grandfather, regularly attending his children’s and grandchildren’s musical activities and sporting events. He had a strong sense of integrity and work ethic that can be seen in the many projects he completed around his family’s twenty-seven-acre farm and how he lived his life. Jack enjoyed bowling and golfing, participating on bowling and golfing teams for many years. He also enjoyed hunting and fishing with his family and friends to include a hunting trip to Colorado and lake fishing in Canada. Surviving are his wife of 60 years, Rosemary (Baker) Miller, four children: Lori Keene and husband Kenneth of Landisburg, Teresa McFadden and husband Raymond of Dillsburg, David Miller and wife Cynthia of Carlisle, and Scott Miller and wife Rebecca of Enoch, Utah, thirteen grandchildren ranging in age from 11 to 28 years, sister-in-law, Marlene, of Halifax, and a number of nieces and nephews. In addition to his parents, he was preceded in death by his brother, A. Eugene Miller. A celebration of life service will be held at 11:00am on Wednesday, December 29, 2021, at New Buffalo Alliance Church in New Buffalo. His burial with military honors will be held at 12:30pm in Indiantown Gap National Cemetery.

The family of Jack H. Miller created this Life Tributes page to make it easy to share your memories.

Send flowers to the Miller family.