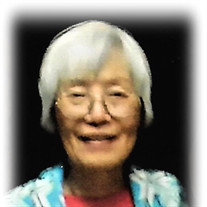 Han Pun “Suzie” Richey, 85, of Shermans Dale, went to be with the Lord on Thursday, December 9, 2021 in Penn State Holy Spirit Hospital, Camp Hill. She was born on October 11, 1936, in Sojong ni, Korea. She was a proud American citizen. Suzie, as she was known by her friends, was a hardworking and dedicated daughter, wife, mother, grandmother and sister. Her family came first. She, and her husband Bill both thought of each other as “the love of their lives.” Bill says, “she was the best thing that ever happened to me!” She had been a switchboard operator for the air force after the Korean War when she and Bill met and married in 1960. She was preceded in death by her Korean Family and a son, Edward W. Richey. Surviving is her husband William Richey Jr., a son, James Lee “Jim” Richey and wife Janet of Mechanicsburg and 3 grandchildren, Emma, Anna and Daniel and several nieces and nephews. Services will be held at 2 PM on Monday, December 13, 2021, in the Boyer Family Funeral Home, New Bloomfield. Rev. Larry Hale will officiate. Burial will be in Mt. Gilead Cemetery, Shermans Dale. A viewing will be held 1 hour prior to the service. The Boyer Family is honored to handle the arrangements for the Richey Family.

The family of Han Pun Richey created this Life Tributes page to make it easy to share your memories.

Send flowers to the Richey family.