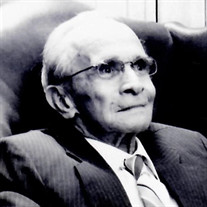 DUNCANNON - Blair Benjamin Bellis, aged 93, of 2 Bixler Lane, passed away peacefully at his home on Friday, November 5th, 2021. Born in Gratz, PA on May 25, 1928, Blair was one of 19 children born to the late Elmer Eston and Luma May (Hartman) Bellis. He was an Army veteran of the Korean Conflict (Anti-Aircraft Artillery), whose later assignment as a cook led to his life-long love of cooking. Blair married Ruby Jean Wetzel of Millersburg, and together they raised four children. A longtime construction worker, he worked on major projects in the Harrisburg area. Blair enjoyed the outdoors, gardening, yardwork, home maintenance, and watching all manner of wildlife. Extremely skilled with his hands, he was adept at keeping his kids’ vehicles on the road. He had the tools to complete any project, and the heart to help others complete theirs. He was an avid reader, a news buff and sports fan, and enjoyed puzzles and cryptograms. He was a member of Duncannon VFW Post 255, and American Legion Post 340, and also volunteered as a forklift driver for Bread of Life Outreach in Newport. Blair is survived by his wife of 71 years, Ruby (Wetzel) Bellis; four children, Gary (Mary) of Newport, PA, Lori (Stephen) Coetzee of Martinsburg, WV, Craig (Wendy) of Washington, PA, and Blair (Wendy) of Albrightsville, PA; 12 grandchildren; 34 great-grandchildren; and 7 great-great grandchildren. He is also survived by five siblings, Esther Schaffner of Dalmatia, Mark of Millersburg, Dorothy Wiest of Matamoras, Marian Memory of Tampa, FL, and Bette Heiser of Millersburg. He was preceded in death by 13 siblings, Jean, Constance, James, Charles, Anna Ayers, Lillian Sitlinger, Mary Bellis, Lloyd, Robert, Mabel Wieda, Donna (Rich) Koppenheffer, Hilda Collier, and June Messner. Services will be held on Wednesday, November 10th, 2021 at Family Life Center, 27 W Shortcut Road, Newport. A 10 a.m. public visitation will be followed by an 11 a.m. memorial service (co-officiated by Gary and Craig Bellis), with a Fellowship meal immediately following. A private interment with military honors will follow at Woodlawn Memorial Gardens, Harrisburg, PA. In lieu of flowers, donations may be made to Newport Assembly of God Church, 253 N 6th St, Newport, PA, 17074. The Boyer Family is honored to handle the arrangements for the Bellis Family.

DUNCANNON - Blair Benjamin Bellis, aged 93, of 2 Bixler Lane, passed away peacefully at his home on Friday, November 5th, 2021. Born in Gratz, PA on May 25, 1928, Blair was one of 19 children born to the late Elmer Eston and Luma May (Hartman)... View Obituary & Service Information

The family of Blair Benjamin "Ben" Bellis created this Life Tributes page to make it easy to share your memories.

Send flowers to the Bellis family.